Catching a Falling Knife – Buying Stock When Everyone Else Is Selling

Traditionally, the thinking is that dividend growth investing is a relatively safe endeavor as we proudly invest, most of the time, in mature companies that have a long track record of rising revenues and rising dividends. But even the safest investments can come with risks one cannot find on a balance sheet nor income report. In recent weeks the dividend blogging community came alive about discussing the future prospects of American Realty Capital Properties, Inc. (ARCP). While on paper the company offers a stable of coveted real estate income properties and generous yield, one could not foresee an accounting irregularity scandal that would arise and later punish the stock and shareholders with a 30% decline. 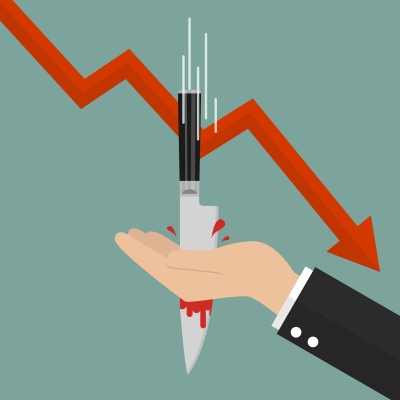 But what about more tragic occurrences? An occurrence when people get sick, the environment gets polluted or worse, someone actually dies. These instances beg the question, is it wise to buy stock of a company after it experiences a catastrophic event? Dozens of papers and research have been published detailing catastrophe stock market theories which show how catastrophic events affect stock prices. This question is similar to an article I wrote not long ago which asked, “Do You Sell After A Dividend Cut?” Let’s review some events of recent time and take a look back and see if holding a stock or buying a stock after a catastrophic event proved to be a wise decision.

In recent years, no other catastrophe grabbed as much of the headlines as the Deepwater Horizon oil spill and BP p.l.c. (BP). Prior to April 20, 2010, BP was considered one of the larger and more stable energy and energy services company on the planet. It’s stock was widely held among many pensions, banks and other large financial institutions. Yet, on that fateful day a tragedy occurred resulting in the loss of eleven lives and later the pollution of the Gulf of Mexico and marine life and wetlands that border the spill site. Of course, as a direct result of this disaster BP’s stock plummeted from about $60 a share to a low of $27. In the months that followed, BP a high yielding dividend paying stalwart eliminated its dividend. Other dividend paying companies, Halliburton Company (HAL) and Transocean Ltd. (RIG), involved in the BP operation in the Gulf of Mexico saw their stock prices plummet in the aftermath as well.

From a contrarian perspective these are opportune times to invest in companies that are suffering from a major public relations standpoint. In the weeks and months that followed the images of all three companies, with BP taking most of the brunt, suffered tremendously. Of course both HAL and RIG have since recovered quite a bit since the disaster as did BP. Was it wise to buy after this catastrophic event? Looking back, the answer was a resounding yes.

Another example of taking a contrarian position in a stock that just suffered a catastrophic event takes us back to 1993, when 732 people were infected with the E. Coli bacteria from eating undercooked beef at Jack in the Box Inc. (JACK) restaurants. This event not only affected many people it also claimed the lives of four children and left dozens with permanent injury including kidney and brain damage. Like the Deepwater Horizon oil spill, JACK’s (at the time the symbol was FM) stock price plummeted providing an opportunity to buy at a great discount when so many were selling.

Like the BP example above, JACK was not alone in suffering as a result of these deaths and sicknesses. The contaminated meat source, at the time was from Vons (now owned by Safeway Inc. (SWY) which was just bought by Albertsons this year). As a result of this mishap Jack in the Box dropped Vons Cos. as a meat supplier which eventually impacted their overall business. Clearly, when major events impact one company a chain of causality occurs that often brings down many other businesses as well. Of course, since the disaster occurred about twenty years ago both JACK and former meat supplier Vons appreciated dramatically over the years. Again, it clearly was wise to buy stock in JACK after these unfortunate deaths and sicknesses occurred.

Similarly, in July 2002, ConAgra Foods, Inc. (CAG) had to recall 18.6 million pounds of ground beef from its subsidiary ConAgra Beef Company because of an E. Coli outbreak. This was one of the largest meat recalls in U.S. history and was responsible for sickening more than 45 people in 23 states with one death. Charting CAG to the summer of 2002 shows a stock price that went from around $28 a share to a low of about $21 in a matter of days. This represents a huge 25% decrease in stock price. Again, had you bought stock after these new lows were reached and simply held on to your CAG shares with reinvested dividends you would have experienced both capital appreciation as well as gain extra dividend income.

Just this year, a story that came out of China rocked the stocks of McDonald’s Corp. (MCD) and Yum! Brands, Inc. (YUM) after an American owned meat company operating there sold expired and tainted meat to the restaurant operators. No sicknesses or deaths resulted from this scandal, yet both companies had to report a “significant negative impact” on their quarterly securities filings that ultimately hit sales figures badly.

There are literally dozens of health related, environmental and scandal related occurrences that have affected a company’s stock price negatively. And in practically every case, a rebound eventually occurs. Of course, this is not a blanket result to every catastrophe or scandal that rocks a corporate structure. In recent times, we have seen some of the largest accounting frauds in U.S. history take down WorldCom and Enron. Buying stock after news of those scandals broke would have been disastrous. As always, when determining an entry point for a stock that has recently suffered a public relations gaffe one should always look upon these opportunities on a case by case basis.

The next time a company you are considering or are already invested in suffers form a catastrophic event, whether death related, environmental or simply an account irregularity, you must ask yourself if it would be an opportune time to take action and invest at a time when everyone else is selling.

Would you buy stock in a company after it suffered a catastrophic event? Please let me know below?

48 thoughts on “Is It Wise To Buy Stock After A Catastrophic Event?”