Investing In The Beer Sector

A few days ago I wrote a post over viewing various dividend paying stocks in the wine and spirits sector and figured a post highlighting some beer companies might make sense at this time too. Beer, along with wine and spirits, provides a very stable and recession resistant business model that may afford a space in a dividend growth portfolio. While there are literally hundreds and hundreds of beer companies around the world, very few actually pay dividends while at the same time the entire market is essentially dominated by just a handful of mega players.

Let’s begin by taking a look at one of the largest beer companies in the world, Anheuser-Busch InBev SA/NV (BUD). A company that really needs no introduction, BUD is a reincarnation of its former self after the Belgian brewer InBev bought Anheuser-Busch for $52 billion in 2008 creating the world’s largest brewer. With such iconic names in its stable of brands including Budweiser, Corona, Stella Artois, Beck’s, Hoegaarden, Bud Light, Skol, Brahma, Modelo Especial and many more, BUD clearly has tremendous brand power under its helm. Currently yielding 2.76% based on its biannual dividend, BUD has a moderately high payout ratio of 78.5% which is well covered by its current EPS of 5.53. Looking at the valuation of BUD it has a current PE of 22.4 which is slightly higher than its five year average and the market in general. Forward PE still makes this stock look a little expensive too at 21.6. 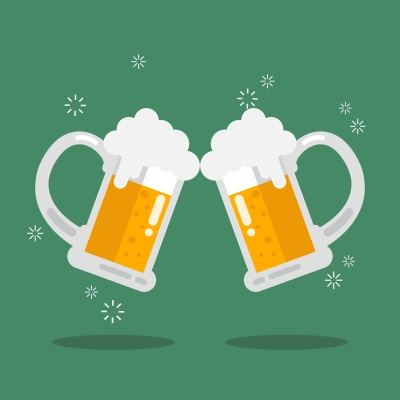 Next is another famous beer maker Molson Coors Brewing Company (TAP). TAP was created after a merger between Canadian brewer Molson merged with Coors in 2005 creating the world’s seventh largest brewer by volume. As with BUD, TAP controls a very large cache of well known worldwide brands including Coors (Light), Molson Canadian, Keystone, and brews or distributes under the Amstel Light, Heineken, Murphy’s, Newcastle Brown Ale, Dos Equis, Sol, Tecate and Miller Genuine Draft brands along with Mickey’s, Milwaukee’s Best, Olde English 800, Sharp’s non-alcoholic, Foster’s and many more. Talk about brand power. It seems that between BUD and TAP you can control a huge portion of the worldwide beer market. Currently yielding 2.13% with a moderate payout ratio of 59.4% based on an EPS of 2.76 TAP’s dividend can be considered safe with room for future growth. TAP also has a pretty impressive ten year annualized dividend growth rate of 13.70%. With a current PE of 27.9, TAP can be considered quite expensive at current prices especially when compared to its five year average PE of 15.2. It seems that all alcohol related stocks are trading at rich valuations. Are people simply willing to pay up for these quality names? Forward PE looks a lot more enticing at 18.7.

Finally, we’ll take a look at Brazilian beer and beverage maker Ambev S.A. (ABEV). Through its subsidiaries ABEV produces, distributes and sells beer and soft drinks primarily under Skol, Brahma and Antarctica brands. It also distributes popular beer brands such as Corona, Stella Artois, Budweiser and Bud Light among many others. Currently yielding a decent 2.84% with a moderate payout ratio of 67.8% based on an EPS of 0.76 (Brazil Reals) the dividend does appear to be safe. Looking at the current valuation of ABEV we have a PE of 24.8 which is above the five year average of 20.4. Forward PE is in line with current PE.

Of course there are other large publicly traded beer companies that exist but unfortunately offer a low current yield. Names such as SABMiller plc (SBMRY) yields 1.83%, HEINEKEN (HEIA.AS) yields 1.50% and Boston Beer Co. Inc. (SAM) which yields 0.0% come to mind. That doesn’t mean that these companies might be bad investments it’s just that I prefer to focus exclusively on dividend paying stocks for my portfolio with a minimal yield.

Have you considered any of these beer companies for your portfolio? Please let me know below.

28 thoughts on “Brewing Up Dividend Yield”